I finally made it to a cake decorating class. Not bad for my first two hours. 🙂

Yesterday, I had my largest live cash. Going into day 3 of WPT Event 3 Montreal at Playground Poker I was sitting 26/28 with a tiny stack. I spent the morning trying to figure out if It would be best to fold my first hand and hope for someone to bust and take a $200 pay jump.

After looking at the positions of the stack sizes, I figured my best play would be to jam a little wider than NES if the first hand was folded to me. I was UTG +1 at a 7 Player table. I looked down at my first hand and had Q8s that made my play pretty easy and I jammed. The reason I picked this spot was simple. The button was a <10bb stack and both the SB and BB had 12-19BBs

Right before the second hand a player busted and we had a table redraw.

I went through the blinds. I was folded to in the BB and I looked down at 58s so I jammed and was snapped off with A5 but I hit a straight.

A little while later I woke up with 99 utg. I raised and was jammed on by the BB. I knew I was in a race, but I was already on a freeroll. My 99 held. Looks like I was going to be playing for a bit and my plans to watch Dumb and Dumber 2 last night would have to wait.

My biggest flaw playing live is I don’t have the experience. I love playing, but I am not good with the chips and I often get confused with my chip stack and raise a bit too large or when players are talking I can’t focus as well. I have only played about 12 – 15 live events lifetime, I know I will get stronger at this in time.

So out of those games why have I now final tabled two events in extremely large fields 7/937 and now 3/1331. The answer is simple before the Ladies WSOP game I had a bit of coaching and I’ve watched a ton of MTT videos from BlueFirePoker. I know what you are thinking, Plug she works for BlueFirePoker but it isn’t it. I don’t get into the situations I have been because I ran well. I have put myself in a spot where I get paid to learn, not many people can say that. I get to watch the videos from Bfizz11, Aaron Been and DDbeast. From watching those videos I have continued to learn how to make my decisions easy and make decisions harder for other players. That brings me to this hand.

Raymond Kay opened from utg to 600K. I 3bet from the big blind. I don’t remember the amount I bet, but I do know that I went bigger than I would normally. The reasoning was simple they have already 3 bet me and 4 bet me light. Eventho I didn’t see the hand, I knew because they kept asking me what I folded. Tip: normally when players ask this without showing their hand, they want the pat on the back for making you fold something better. I wanted to make the play a bit harder for them. I knew that they were bullying me because I folded a few times in some small pots. If they flatted the pot would be big enough that I could go all in on the flop and they should be calling fairly light. If they folded, they would most likely slow down because I changed the game that they had gotten into the rhythm of. Best case scenario was they would put me all in. My play was win-win imo.

Raymond raised 600k. I 3-bet
He pondered for a moment before announcing all-in, and Lesley made the quick call.

Unfortunately, it didn’t work out for me, but I am extremely happy with the way I played and ecstatic that I was able to come from 3rd last with a 28 left finish in 3rd for $22k. 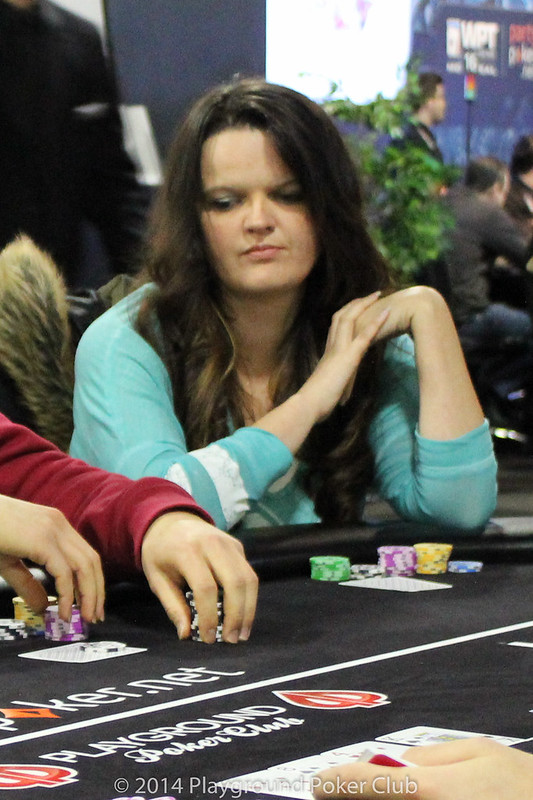 My diet bet challenge to lose 4% of my weight in 28 days ended the other day. I was close, but not close enough to win it. I have really been loving going to kickboxing classes unfortunately I have to take a break from that and pretty much any exercise I have been doing. Last night my back gave out again, not at kickboxing, not at trampoline class. A single step while walking across my living room caused my back to give out, yeah I run good. For those of you that are counting this is the fourth extremely painful time that my back had given out.

I spent a lot of last night and this morning feeling sorry for myself. How every time life seems to be working out I keep getting kicked right back to the starting line. I know I have a life a lot of people would dream of, but is it so wrong to expect more from myself? Is it wrong to want to be in control? Last time this happened, I was in Physio for four months. Is it wrong to think about how much I could have accomplished in that time? The answer to all those questions is simple. YES, it is wrong. I can’t do anything about it, but work on what is next. Weight wise, I can focus harder on a diet. Work out wise, I am stumped. Open for suggestions.

Unfortunately, this isn’t going to be the last time this happens to me. Once my back is better I am going to go try again and if I get hurt again, I am going to deal with it. The only thing worse than the pain I am in right now would be giving up trying to be the best me I can be.

WPT Montreal starts in a few days and I am excited to go play a few side events. If it wasn’t for this coming to town I would have most likely put off going to the doctor for a few days but I really want to go and play. Scratch that, I need to go and play.

PLO wise, I feel like I have learned a lot pretty fast. My goal this month is not to play a single ZOOM hand. I am going to keep this part of my blog pretty small while I am  trying to learn and until January. That is when my real goal starts. For those of you that missed that post, it is to make Supernova by playing PLO. Add in a positive win rate pre rake-back and you have a goal. I’ve never tried for supernova or played a ton of hands online. I really should have by now, so I’m way overdue.

Hopefully stars does not make crazy changes to VIP system.

So, What happens when you fail? I start again.

Yesterday was Halloween, my favorite time of the year.  I didn’t get a single kid knock on the door. Even with a few decorations. I kept looking out the window and didn’t see any kids walking down the street.  When I lived in Toronto I had 200+ kids every year trick or treating and some adults. My two Halloweens in Montreal, living in two different places, I have had a total of 0 kids combined knock on my door.

Back in Toronto my niece did something a little different for Halloween. She and her friend traded in her trick or treat pillowcase for a box. Instead of candy she went door to door and asked for food donations for the food Bank. They collected two boxes of food for the needy.  She is a constant breath of fresh air and she saw a great opportunity to help others and she took it. This isn’t the first time she has done something that has inspired me or surprised me.

She once made a vow of silence with her friends so that they could feel what it was like to have no voice or say like some women live every day. I can imagine this was extremely hard for her as she is so talkative and curious. I am sure that her parents thought no way she would be able to do it, but she did. She felt the feeling of not being able to communicate for herself, not be able to stand up for herself or question others.

As she grows I hope she never loses this mindset and keeps trying to empathize with people in different situations. She is a true hero.